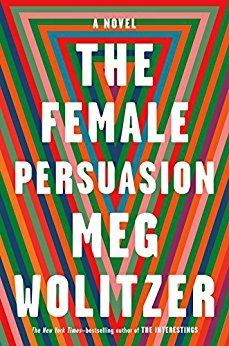 The Female Persuasion by Meg Wolitzer

I really enjoyed this book! It was a fun read – I just genuinely enjoyed this book. I’d recommend it. It didn’t blow by socks off like Circe by Madeline Miller, and I don’t think it’ll stick with me as much as Prep by Curtis Sittenfeld has.

A couple of things I really enjoyed about this book:

Faith, who approved of Greer. The approval was as soft as velvet, and the desire for that approval was, also like velvet, a little vulgar.

Having power meant that the world was like a pasture with the gate left open, and that there was nothing stopping you, and you could run and run.

The audience was well-dressed; it was a sea of soft pastel and the occasional basic black, because even though this was California, New York roots ran deep.

Everyone here knew that shriek, which signaled the happiness of women spending time together.

Her résumé was peppered with acronyms, the names of NGOs with which she’d consulted. All those capital letters, when looked at on one sheet of paper, had the effect of a firewall, or a code that could only be broken by someone much smarter than you.

This book didn’t feel like pure fluff like summer beach reads such as those by Madeline Wickham/Sophie Kinsela. This book falls neatly into the middle: a book that feels “literary” in that it has something to say but also is approachable. I liked that. Ultimately, I’d recommend this book to a friend – that’s all that really matters.

Book Review: The Year of Less

This site uses Akismet to reduce spam. Learn how your comment data is processed.

Thanks for stopping by my little corner of the internet. I hope you have a bit of fun while you’re here ♡