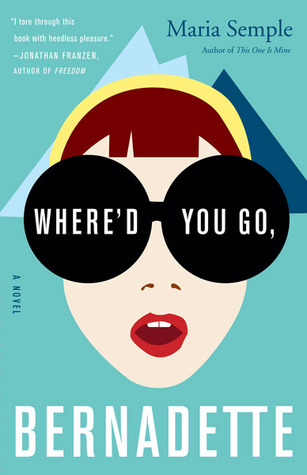 I LOVED THIS BOOK! The book is mostly a collection of letters plus some narration of the days leading up to and after Bernadette Fox disappears. The parts of the book that are Bernadette’s letters are straight up, laugh-out-loud, downright HILARIOUS. These were some of my favorite parts of the book

Sometimes these cars have Idaho plates. And I think, What the hell is a car from Idaho doing here? Then I remember, That’s right, we neighbor Idaho. I’ve moved to a state that neighbors Idaho. And any life that might still be left in me kind of goes poof.

My daughter did an art project called a “step book,” which started with the universe, then opened up to the solar system, then the Earth, then the United States, then Washington State, then Seattle—and I honestly thought, What does Washington State have to do with her? And I remember, that’s right, we live here. Poof.

It’s funny because Bernadette hates living in Seattle, but I actually lived in Seattle and loved it! But then again, I was like 3, so… Anyways, her rants are just the best. I really loved her comments on seasickness.

Do you get seasick? People who don’t get seasick have no idea what it’s like. It’s not just nausea. It’s nausea plus losing the will to live.

This bit is so accurate! I get terrible motion sickness. Once I took a cruise from the Boston Harbor (which smells DISGUSTING in case you were wondering) to Bermuda. The first 2-3 days on the cruise, we travelled from Boston to Bermuda against the current. Those might have been the worst 3 days of my life! I was so sick and practically bedridden!  There wasn’t enough Dramamine in the world to help me.  I mean, totally not a real problem, but it felt pretty dire to me.

Seriously, though, this novel is an absolutely delightful read! There were some really interesting twists and turns: some of which I anticipated and some that I did not (which makes all the more fun!)

This book also jumps back in time to show more about how Bernadette Fox came to be where she is currently, and I have to say – she’s got a damn good backstory.

Also, I found out that Where’d You Go, Bernadette was turned into a movie! Here’s the link to the trailer! I’ll definitely watch the movie next!

Book Review: The Heart Is A Lonely Hunter

Book Review: The Year of Less

This site uses Akismet to reduce spam. Learn how your comment data is processed.

Thanks for stopping by my little corner of the internet. I hope you have a bit of fun while you’re here ♡